Thanks to everyone who came from all over Australia to the Dental Mastery Conference in Melbourne on the weekend. It was great speaking to such an enthralled crowd. I hope everyone left with a better understanding of branding and digital marketing. 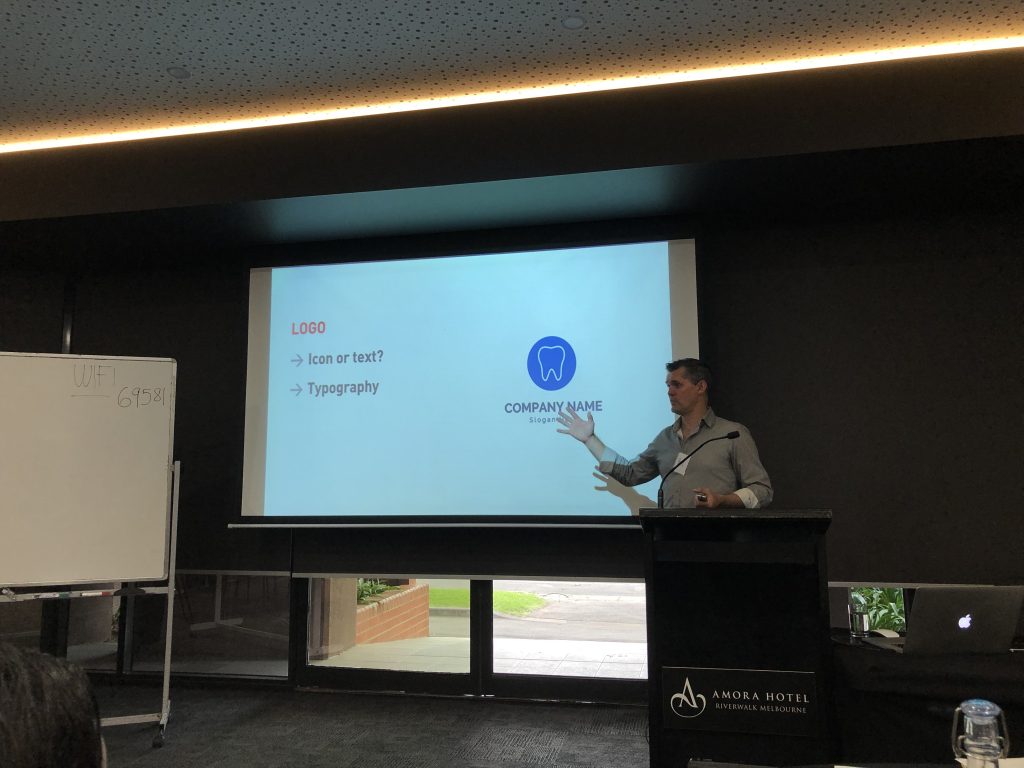 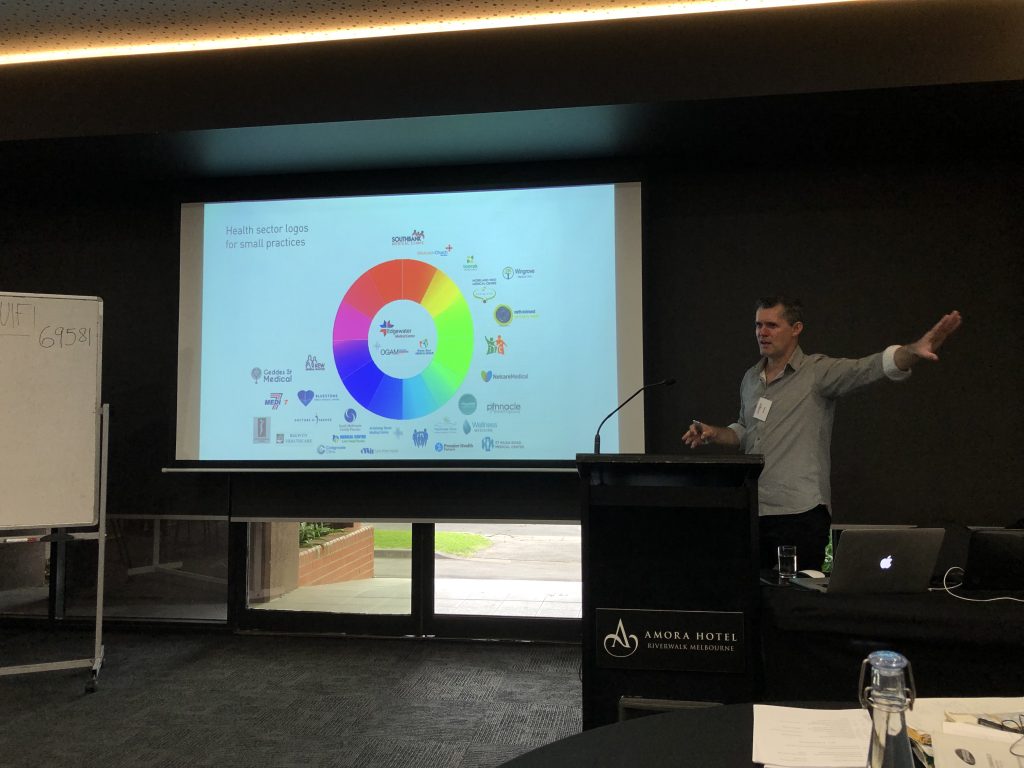 It’s only retrospectively that I noticed that Microsoft has endowed me with some king of special powers. I’m not sure that Wonder Woman’s headband is the look I would normally tout. I’ll have to think more carefully about where I sit next time. 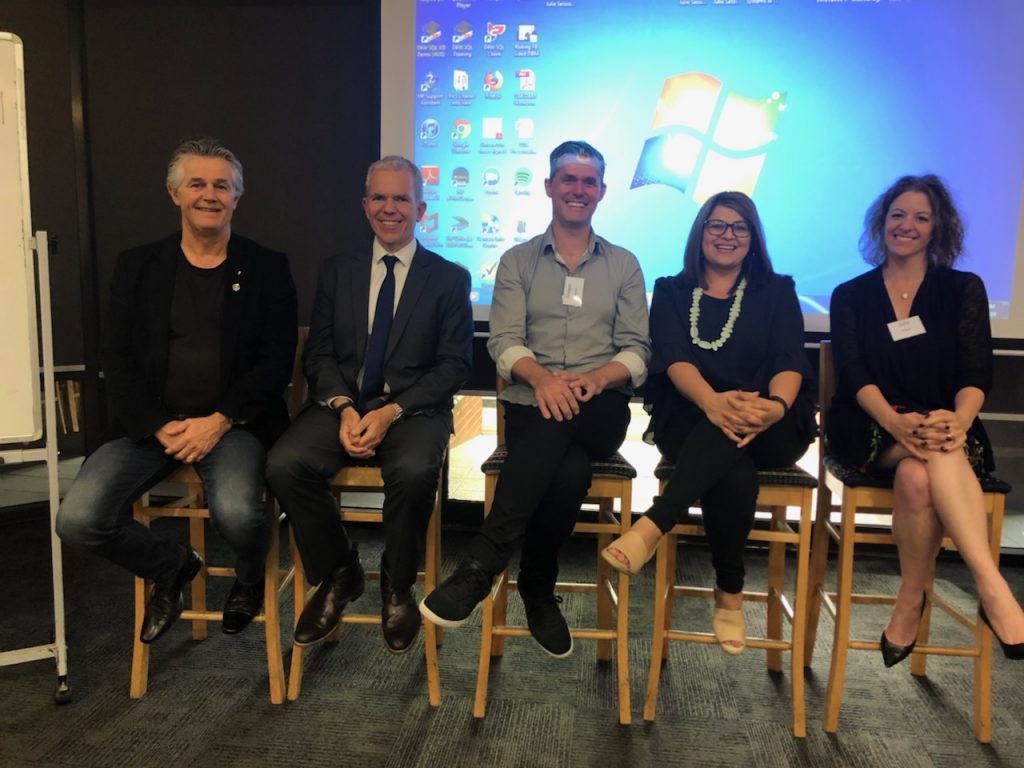 I know quite a few of you were trying to madly take notes on a few of my presentationslides, so here are a few of the key ones.

Below is the slide I hope gave you the greatest insight int what a brand really is. 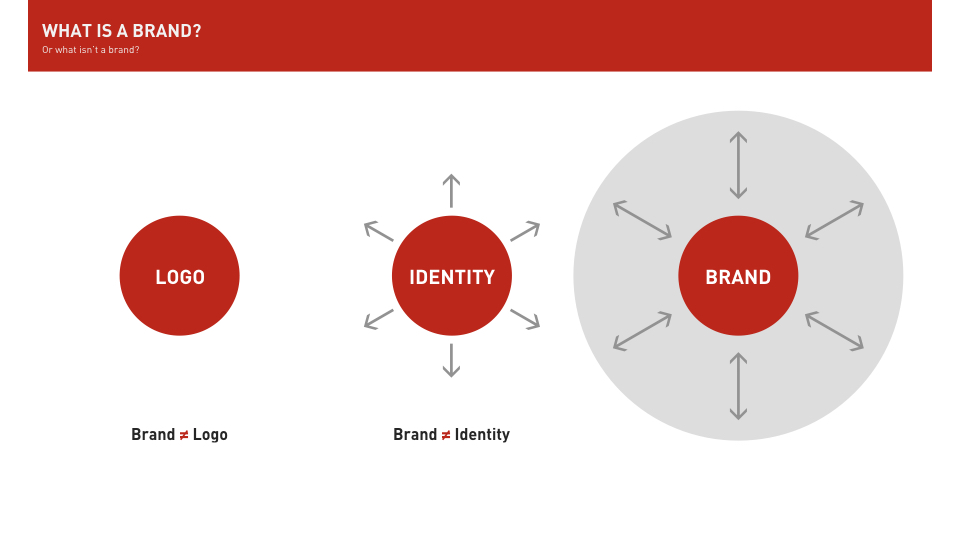 I’m sure a part of me has just include this because I still can’t believe Chanel made a boomerang. But more importantly I hope it helped you understand what brand equity is. How it can not only be transferred between other goods and services, but also from the elements of your visual identity. Hence a quality business card, signage or website will enhance your clients’ belief in the quality of your goods or services. 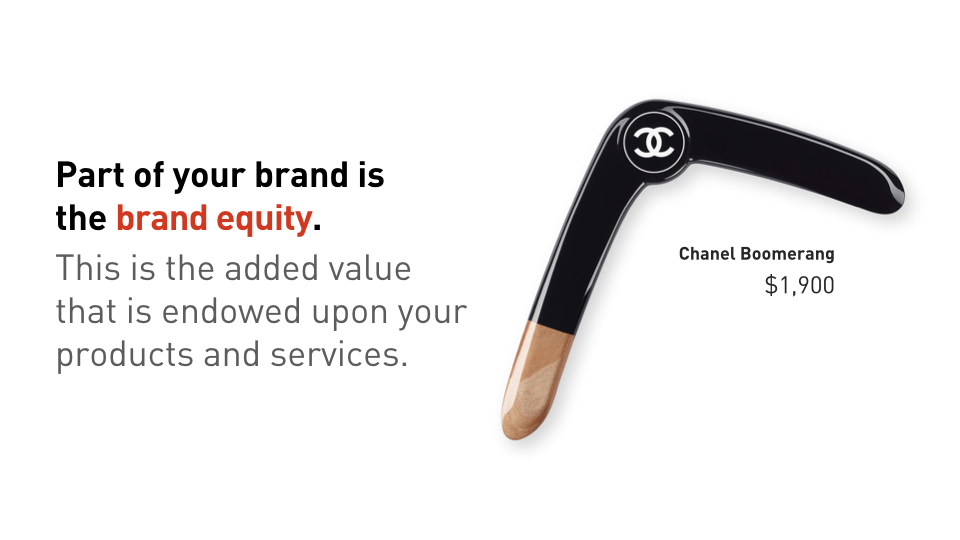 I saw a few of you trying to take photos of this one. I know it is not a quintessential list, and some thoughts are more focused on the frivolous, but still seeing your brand from all dimensions is imperative to success. 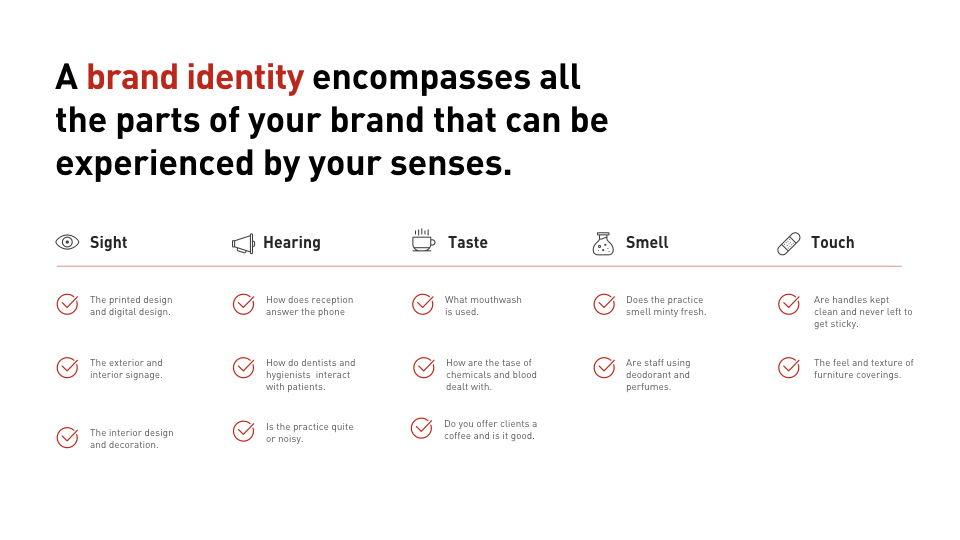 YouTube has announced, via its official Creator Insider channel, that they are allowing more non-skippable ads to channels that already monetise videos.

At first this feature has only been available to a select few content creators as an option that they could experiment with. Now YouTube are offering this option to everyone in the YouTube Partner Program. The idea is that creators will have the ability to earn more money. However, reading the comments insinuates that many see this as a distraction from the real issue that YouTube is keeping the lion’s share in the first place.

Will this mean we will have to watch lengthy ads on YouTube?

Presently, a full length, non-skippable commercial on Youtube has a maximum length of 15 to 20 seconds. Usually we only have to wait 5 seconds to hit the ‘Skip Ad’ button, so this will mean 3 to 4 times the wait until we can view the content.

Some creators are saying non-skippable ads make them less money as people bail out of the video entirely. Our guess is that YouTube is not trying to make this an overnight success. This is part of a long term progression which will have us soon used to seeing ads all the time. We will become indoctrinated. Unlike TV channels there is no remote control, we will be like a rabbit caught in the headlights unable to look away.

How will non-skippable YouTube ads affect the creative industry?

There has been a massive shift in advertising budgets to websites in the last 20 years. Recently, that has moved into the more niche areas of SEO (Search Engine Optimisation) and SEM (Search Engine Marketing). Google has more and more given ranking preference to sites with video. Not because it offers a better experience, but because it offers them yet another way to line their pockets. For the video production businesses this has meant they have had to adapt.

We ourselves have had to retune our old TV commercial brains and adapt them to creating watchable content for our clients’ YouTube Channels. Now with the resurgence of the traditional commercial, we should see a further shift back to video based promotions.

With the viewer unable to ‘Skip Ad’ they will effectively see themselves in a world pre-remote control. The ad no longer has a central focus to entertain in order to stop you changing channel, it will simply have to sell, sell, sell.

It used to be common practice not that long ago to see lots of fake backlinks. Links that directed traffic back to your website have been one of the most important SEO factors for quite some time. They meant that you were credible website with important information. So important that other sites were referencing you.

How backlinks cheated the system in the past

Of course, people very quickly started to create their own backlinks. Websites appeared all over the web that offered nothing but backlinks. If you sought them out, all you saw was pages upon pages of links with no valuable content. Google’s guidelines for link schemes forbid it, but with no way of detecting them it was a quick way to boost your ranking.

But like the lawlessness of the wild west, eventually the sheriff hunts you down and you end up with a noose around your neck. Google developed new algorithms that could detect the quality of these links and their sources. Many companies were blacklisted by Google and lost all ranking. The companies that sold these services still walked free with a wallet full of cash.

Who was in the wrong?

The companies that bought these SEO services all claimed innocence, while the SEO companies all claimed that they were just playing within the law. It was a bit like punching someone on the football field: sure, it’s a vicious crime in society, but on the field, it’s just a free kick and a week’s suspension.

The question has to be though, were they so innocent? No one could possibly be so stupid as to not check on the credentials of their accountant, lawyer or the digital marketing firm that represents their company. Every conversation I have ever heard of after the event has involved someone telling the client that they can assure them of number 1 ranking on Google via their manipulation of the system.

So how do you create good backlinks now?

Firstly, the best backlinks are often not created by you or anyone else you could coerce. The best backlinks come from genuine websites which might have similar interests. If you create great content, people will share it. It might take time and you may have a lot of content that doesn’t hit the mark but that is allays what is going to serve you best. This is what the user is looking for and Google wants to give people good search result so they are looking for this too.

So, Google has learnt to only follow quality links. It uses machine learning to match data from all over the web and cleverly denies any link juice to websites it considers unworthy.

How are companies still beating Google?

Detect the websites that offer links that Google follows and hit them hard. There are many legitimate websites that just don’t have the resources to check every new listing. Some of them are important websites such as newspapers which have so much credible information that Google would never want to blacklist them. Users can add multiple backlinks disguised in many different ways to gain many links.

To explain it best I should give you a case study.

Case Study:
The dentist who bent the truth (just a little bit).

Richmond Family Dental employed Platinum Marketing to do some SEO work for them. Rather than go the path that Google outlines in its Quality Guidelines they decided to try beat the system, and it worked. They sought out credible sites to add their links to and went to town.

For example, a business listing ‘Invisalign Melbourne’ links back to their Invisalign page while one titled ‘Dental Implants Richmond’ links to their implant page. The intent of the site of course was to allow businesses in and around Noosa to create a single listing and link it to their site. I am 100% sure that they never foresaw a business 2,000km away listing themselves 20 times there.

This helped some of their key pages climb dramatically. For one key phrase which would cost over A$14 a click in AdWords they managed to achieve an organic ranking of 9 on the SERP (Search Engine Results Page). This is an impressive result but at what cost.

Surely the integrity of Richmond Family Dental hangs in the balance. They haven’t outright told a lie, but they or a company who represent them definitely have tried fool Google. As the user is inclined to see these rankings as being genuine evidence to the quality or popularity of a business or their service, they have inadvertently manipulated the public. This type of action robs other genuine business of their income and as it stands against the morals of any medical practitioner I have done business with, forges an unfair playing field.

What do we expect Google to do about fake backlinks?

For a start, Google is quite clear that this is against their policy. They have resources to allow reporting and an actual human being will look into it. Unfortunately, their reporting form doesn’t quite match the issue at hand. The closest form they have is hidden in some fine print at the bottom of a page on Link Schemes.

If you see a site that is participating in link schemes intended to manipulate PageRank, let us know. We’ll use your information to improve our algorithmic detection of such links.

I’ve reported similar activity before and see a whole website disappear from Google and we can only hope they take similar action. This, however, will not stop the SEO company who is most likely the culprit from continuing this type of behavior. And as they haven’t broken any laws it may be hard for the dentist to find compensation. But as with any deal that sounds too good to be true, I expect there was some little voice in the back of their brain that said, “Maybe this isn’t right? Maybe we shouldn’t do this?”

Recently, one of our clients opted towards spot colour printing for their business cards and what a huge difference it made.

This demonstrates the value of choosing your Pantone colour at the start of the design process. Also one of the reasons why we always recommend spot colour printing to our clients. It may be pricier than your standard four colour printing, but the results are worth it.

Finally we own the internet. Yep, the whole entire internet. Other web development business around Melbourne simply rely on an ADSL, cable or even that feeble NBN. Whereas here at Juggler we have decided to buy the internet itself and keep it in our office. Previously it had been on top of Big Ben in London where apparently people could get the best reception, but now its here. Yes here in the North Eastern suburbs of Melbourne is the hub of the entire internet and we have it.

If you don’t believe us check out this video explaining how it left Big Ben.

I was wandering through Westfield Doncaster and this logo made me stop and have a double-take.
I’m sure the designer only saw a ram’s head, but I am also sure (as justified by the the store salesperson’s fits of laughter) that I am not the first person to see something else.

As a Google Partner, we are invited to attend special training Adwords sessions annually to keep our skills up to date and current.

Krisitna attended a Masterclass in Mobile Adwords training on this day and bought home a few handy tips to apply to our accounts.

Did you know that 76% of local product searches result in a visit to the store within the next 48 hours?